Over the last year the University Medical Center Groningen has been perfusing donor livers with the Liver Assist. This resulted in the publication “Ex vivo Normothermic Machine Perfusion and Viability Testing of Discarded Human Donor Livers” in the American Journal of Transplantation. The UMCG released the following press release (friday March 15th 2013):

Researchers and liver surgeons at the University Medical Center in Groningen in the Netherlands have been the first to successfully keep a liver at body temperature outside a human body. With this technique, a donor liver can be tested before being transplanted. The researchers have published this worldwide breakthrough in the American Journal of Transplantation. In this publication put online on March 6th this year, the authors describe how the researchers and liver surgeons kept four human livers alive outside a human body. Meanwhile, eight livers have been added to this number.

By using this technique, the researchers in Groningen have been able to keep a donor liver alive for hours outside a human body. This allowed them to test if the liver functions well enough to be used in transplantation. While perfusing the liver with oxygen rich blood, vitamins and other essential nutrients that the organ also receives while in a human body, the researches saw the liver’s color and acidity resume normal values. They also determined that the liver was producing bile again. In short, it resumed its normal functions outside a human body. This technique not only allows a check of a liver’s suitability for a ‘second life’ after transplantation, in the future, it will also enable physicians to improve a liver’s quality. Amongst others, this may be achieved by adding medicines to the blood used to rinse the liver. 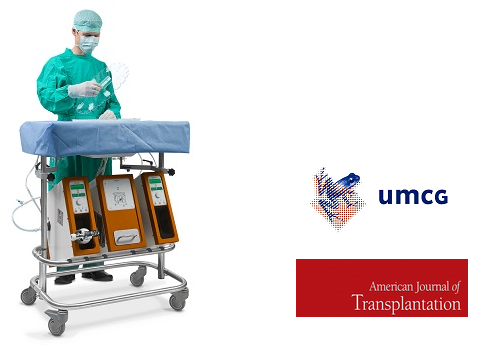 In the Netherlands, 140 livers are transplanted annually. The number of people willing to donate a liver is higher, but a considerable amount of donor livers is rejected for transplantation beforehand. The UMCG expects that by using this technique, the number of rejected livers will decrease.

This technique has been developed using rejected donor livers. Naturally, this has been done with the consent of relatives and in cooperation with the Netherlands Transplantation Foundation. Several centers around the world are currently developing similar techniques. Until now, this was mainly done using livers of mice and pigs. Now, physicians and researchers at the UMCG have been the first to keep human livers alive outside a body. The machine used to keep the livers warm and supply it with blood has also been developed in Groningen and is produced by the company OrganAssist. Variants of this technique have also been developed for other organs, though the technique differs for each organ. Moreover, these different techniques are in various stages of development. In February of this year, the UMCG Transplant Center had a first in the Netherlands when it announced that the improvement of donor lungs outside the body was now suited for use in the clinic.

The UMCG is the largest transplantation center of the Netherlands. Each year, some sixty liver transplants are being performed, roughly a third of which in children. The team at the UMCG expects the new technique to become a regular part of the transplantation program later this year.

We are always available to privide you with more information about the Liver Assist, which is already commercially available and CE marked. Our contact information can be found at our contact page.